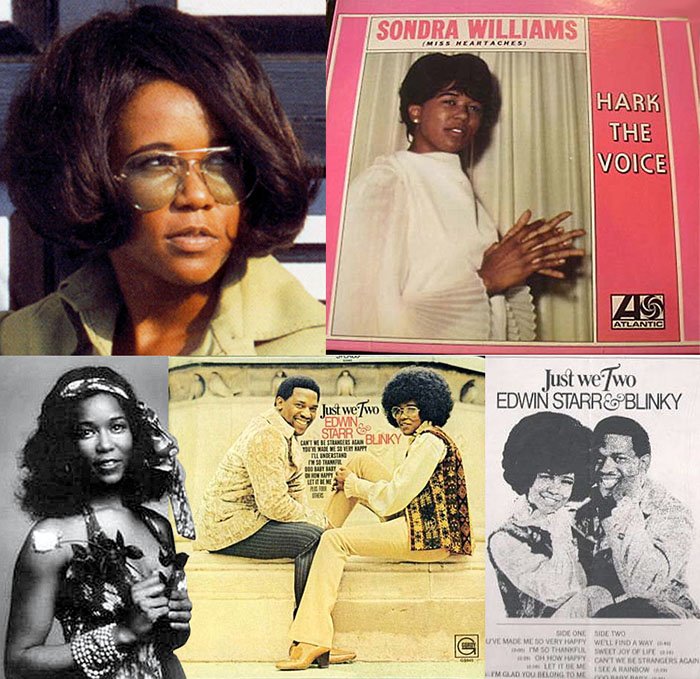 Williams was born in Oakland, California, but later grew up in Los Angeles. The daughter of a pastor, she was active in church choirs since the age of six. Her two siblings are Diana Williams Witherspoon and Pastor Austin F. Williams.

She recorded the album Hark The Voice on Atlantic Records, then moved to Motown where she recorded as ("Blinky") five singles including her debut, the Ashford & Simpson penned single "I Wouldn't Change The Man He Is", (a song reportedly written about Lovin' Spoonful studio bass player James Killingsworth) in 1968, and thought she would find success when she recorded a duet album with Edwin Starr entitled Just We Two on the heels of his 25 Miles. However, they did not get the push that either the Marvin Gaye & Tammi Terrell or the Supremes-Temptations duets did, and success again eluded her when, after becoming a protégé of Sammy Davis, Jr., his deal with the label fell through. Blinky released two further singles for Motown in the early 1970s (on the company's California-based MoWest subsidiary) and has had several others scheduled for release but never actually released. She is also credited with singing the theme for the 1970s TV series Good Times, along with Jim Gilstrap.

Her version of "God Bless The Child" appears on the album Rock Gospel: The Key To The Kingdom and her recording of "Tain't Nobody's Biz-ness if I Do" is on the soundtrack of Lady Sings The Blues, the Billie Holiday bio-pic starring Diana Ross. Unfortunately, most of her solo work, save for a few singles, remains unreleased. She can be heard live on the Motortown Revue Live! CD. In addition, she was one of the original Cogic Singers, with Andraé Crouch, Sandra Crouch, Billy Preston, Edna Wright (lead singer of The Honey Cone), Frankie Karl, and Gloria Jones. Following her non-success with Motown, she returned to gospel music and resumed her given name. On October 31, 2009, Sondra appeared as a backup singer, along with Sharon Jones, performing The Rolling Stones' "Exile on Main Street" as part of the rock band Phish's musical costume at their Festival 8, which was held at the Empire Polo Grounds in Indio, California from October 30, 2009 through November 1, 2009.