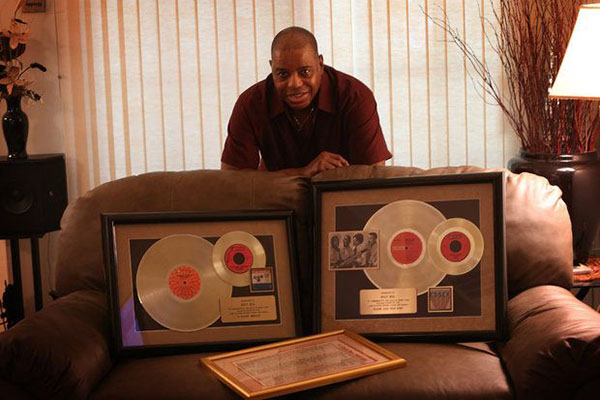 Billy Hill is now 74. Hilly was an original member of Essex, a Motown band that had a hit song, "Easier Said Than Done" in 1961 while he was in the Marine Corps. Photographed in his East Windsor home on Wednesday, June 26, 2013.

Even though it’s been 50 years since his band climbed to the top of the Billboard Hot 100 chart with “Easier Said Than Done,” Billy Hill still remembers all the details. There was the time his band, Essex, was asked to play in a concert in a Georgia park in 1963, when the state was still segregated. Officials planned for the group to do one show for the black audience and one for the white but another performer, Adam Wade, said he would only do one show, Hill said.

“He said he wasn’t going to do a show unless they put everybody in there at the same time. And you know, it went off without a shake,” Hill recalled during an interview last week. That’s a story that even Hill’s wife of 12 years, Grace, had never heard before. Hill will turn 70 in July and celebrate the 50th anniversary of the Essex’s hit song. “Easier Said Than Done” spent two weeks at the top of the charts in 1963.

Forming a band wasn’t at the top of Hill’s list when he joined the Marines in the summer after he graduated from Princeton High School in 1961, but he and fellow Marine Rudy Johnson started singing any chance they got, he said. Eventually the duo joined with Walter Vickers and Rodney Taylor, also Marines, and started looking for a female singer. They met Anita Humes, also a Marine, and the group started singing together four or five hours a day, Hill said.

The band practiced enough that they only spent 20 minutes recording “Easier Said Than Done.”

“Twenty minutes, that’s all we spent. We were so well-rehearsed. We didn’t make many mistakes ourselves because we practiced all the time,” Hill said. All of the band members were still in the Marine Corps, so they had to get special permission to go on tour, Hill said. “We had some sergeants that really took care of us, made sure we got some leave time,” he said.

The group went on “American Bandstand” and “The Ed Sullivan Show”, and performed at the Apollo Theater in Harlem, N.Y. They toured up and down the East Coast in the summer of 1963, Hill said. In November, Hill was shipped to Okinawa, Japan, and the band temporarily replaced him.

“I used to arrange all the backgrounds. You could just hear the difference in the songs,” he said. When he returned to the United States a year later, the Beatles had also gone stateside and changed the music industry, he said. “The Beatles spoiled everybody, they did,” he said. “When the Beatles came along in ’64, everything changed in music.” The group continued recording, but was unable to find the same fame they had found with “Easier Said Than Done.”

“We recorded some good songs, some very good songs and nothing stuck, nothing clicked,” Hill said. Hill spent four years working as a proctor at Princeton University and recording music on the side. Finally he got to the point where he didn’t have enough time to do both, and chose to pursue music full time — this time under the name Billy Proctor, he said.

He sang for Motown and tutored other singers in technique, but when the label shifted its focus to movies, Hill found himself again needing to move on. “We weren’t getting money, so to speak, so I ended up having to go back to work,” he said. Hill returned to Mercer County and took a job as a corrections officer at Trenton State Prison, where he worked for 25 years. Even though he had a new career, he never stopped singing, he said.

“I was into music. The other thing was a job. It was a financial support,” Hill said. Recently, Hill started singing with the Meg Hanson Group at restaurants and private parties. “Every weekend I’m doing something,” he said.